Being a sommelier and known as a “wine guy,” people often ask me if you could really tell the difference between a $100 bottle of wine and a $10 bottle of wine. I usually tell them “It depends.” There are so many factors that go into that question. Let’s assume that the price above for each bottle is the actual cost and not discounted. Let’s also assume that the comparison is between two bottles from the same or similar regions. The reason for this is if your comparing a Napa Valley Cabernet Sauvignon  to a Bordeaux they are very different wines. If you have the Napa Valley first, these wines typically have more alcohol and are more fruit forward with bombastic personalities. Following up with the Bordeaux would make it seem too rustic and simply overpowers the wine. Having the Bordeaux first has the opposite effect. A Bordeaux, typically with lower alcohol and more finesse, makes the Napa Valley Cabernet too alcoholic and flabby. So you really need an equal comparison. The last factor is it depends on the taster. If you have someone that doesn’t have that much experience tasting wine try the two bottles they probably aren’t going to see a difference. So the answer would be no. Unless you enjoy wine, I would not advocate spending that much money on a bottle of wine.

So let’s say that the conditions above are met. Now what? Well I believe that there are good bottles of wine at every price point. So there are nice bottles to be had for $10 and there are some bad bottles to be had at $100. So if you picked out your best $10 could it beat a bad $100 bottle? While it’s certainly possible it’s still a long shot. When a winery is making a bottle costing $100, they are aiming for a very high quality level. To bring the 100 point wine rating scale into the picture for a moment, someone buying a $100 bottle may be expecting at least a wine rating of 95 points. Anything below that may be a disappointment. But for a $10 bottle, a really high quality one may get 90 points. So although that may be a nice bottle, especially for the money, it might not be enough to say it is better than the $100 even though it may not reach that 95 point threshold. No don’t get me wrong, there are some bottles that cost $100 that aren’t even hitting that 90 point mark.

My general feeling is that someone who does enjoy wine will be able to tell the difference. They don’t have to be a wine expert either! They really just need to enjoy wine. Well this past weekend I did a little experiment. I have a friend who I get together with every so often and he too loves wine. So of course we crack a few bottles when we get together, typically some really nice stuff. The past couple of times we have been tasting blind. Now if you don’t know what that means there are two different definitions. Single blind means you don’t know the wine but you may know the region, the grape or the vintage. Double blind means you know nothing at all. So for the wines we cracked, we only knew the grape: Cabernet Sauvignon. He said to bring your “A game” so we both picked out two really nice bottles. I then decided to make it interesting by throwing in a $20 bottle I recently had. The $20 bottle was excellent and I thought it would make it difficult to identify in a blind tasting. All wines were decanted for 1 hour. Here are the results:

We both agreed the aromas on this were closed, meaning it was not giving up much. What I did get was some plum and iron. After sitting in the glass for a while the nose started to open up. Tasting this wine was a different story. It had some nice plum, cherry and iron flavors. It certainly had some complexity to it but my friend and I then argued over the finish. I said it lasted about 30 seconds, which to me is long. My friend argued that 30 seconds was not a long finish and it was shorter than the other wines. Overall I gave this wine 92 points and my friend scored it a 90. Interestingly enough, my friend called this out as the ringer before even tasting the other wine!. Since I had it a week or two before, it was pretty easy for my to identify it immediately as well.

This was a much bigger wine than the first one. The nose exploded out of the glass with aromas of blackberry, black cherry and roses. It was much more intense and very much from Napa Valley. The color on this was a very dark red, somewhat similar to wine 1. Drinking this was sheer joy! Favors of blackberry, currant, vanilla and a touch of iron dance across your palate. This was not just a monster wine though. It was beautifully put together that balanced power and elegance. The finish lasted about 45-50 seconds, clearly longer than the first wine. My friend’s impressions were similar to mine. I gave it a 96 and he gave it a 98.

An important distinction between this wine and the other wines was the color. As a red wine ages it gets lighter in color and this one was starting to show some bricking around the rim, a clear sign of age that my friend quickly pointed out. The nose on this also exploded out of the glass with sweet cherry and plum but also showing some more mature aromas of mushroom. Similarly on the palate it had some nice flavors of plum, cherry and blackberry but started showing mature notes mingled in with earth. The finish on this was about as long as wine 2. My friend and I both gave this 96 points. 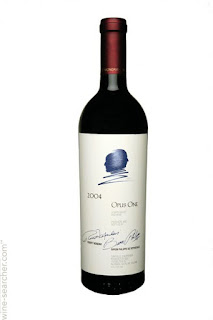 Tasting the Intrinsic on it’s own was one thing but tasting it next to two high end wines was another. It first got my attention by getting 92 from Wine Spectator. On it’s own it’s a fantastic wine for only $20 and could probably sell for three times it’s price if it came from Napa Valley. My friend is a more experienced taster and it was easy for him to pick this out without even trying the other wines. He actually used deductive reasoning to pick out his wine as well. Since he guessed wine 1 was the ringer and he knew that he didn’t bring an older wine (wine 3), he concluded wine 2 was his. The Lail received a perfect score, 100 points, from Robert Parker. Opus One, when the 1979 vintage was released, was the most expensive wine from Napa Valley at the time. It’s had its ups and downs over the years but the 2004 recently got a 96 from Robert Parker.

This certainly wasn’t highly scientific but it was fun to put the above theory to the test. The less expensive bottle definitely stood out compared to the other two wines. I’d like to do this again but with a larger sample size. It’s pretty safe to say though that on this day the less expensive wine was identified as inferior to the other wines.